An audio version of this podcast is also available on

In this episode, hosts Kim Langen and Nathan Langen interview Devon Jones, who for over 2 decades taught at Brookview Middle School and also in a central capacity as a special project teacher at the Toronto District School Board (TDSB). Working with some of Toronto’s racialized and marginalized students at Brookview Middle School, in the Jane and Finch area, Jones strives to show his students “how to make smart choices, how to be civically engaged (and) how to be part of the larger social fabric.”

In 2007, Jones co-founded the Youth Association for Academics, Athletics and Character Education (YAAACE), a social enterprise developed to help marginalized and poor youth through “year-round comprehensive programming and activities.” It now helps about 600 kids annually. The program was founded primarily to create a viable alternative to guns, drugs, and gangs. Devon Jones is an Educator, Community Developer and Youth advocate and his work have been highlighted in the Toronto Star, National Post, and the CBC. He currently resides in Toronto with his family. 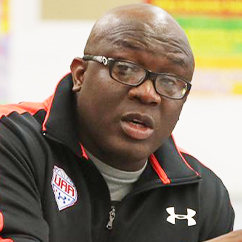 Devon Jones is an Educator, Community Developer and Youth advocate and his work have been highlighted in the Toronto Star, National Post, and the CBC. His commitment to young people in an area of Toronto that’s been branded the most dangerous area to be a kid has extended beyond school boundaries and hours and has inspired thousands of young people. Jones was given an honourable mention in the Toronto Star Teacher of the Year awards.